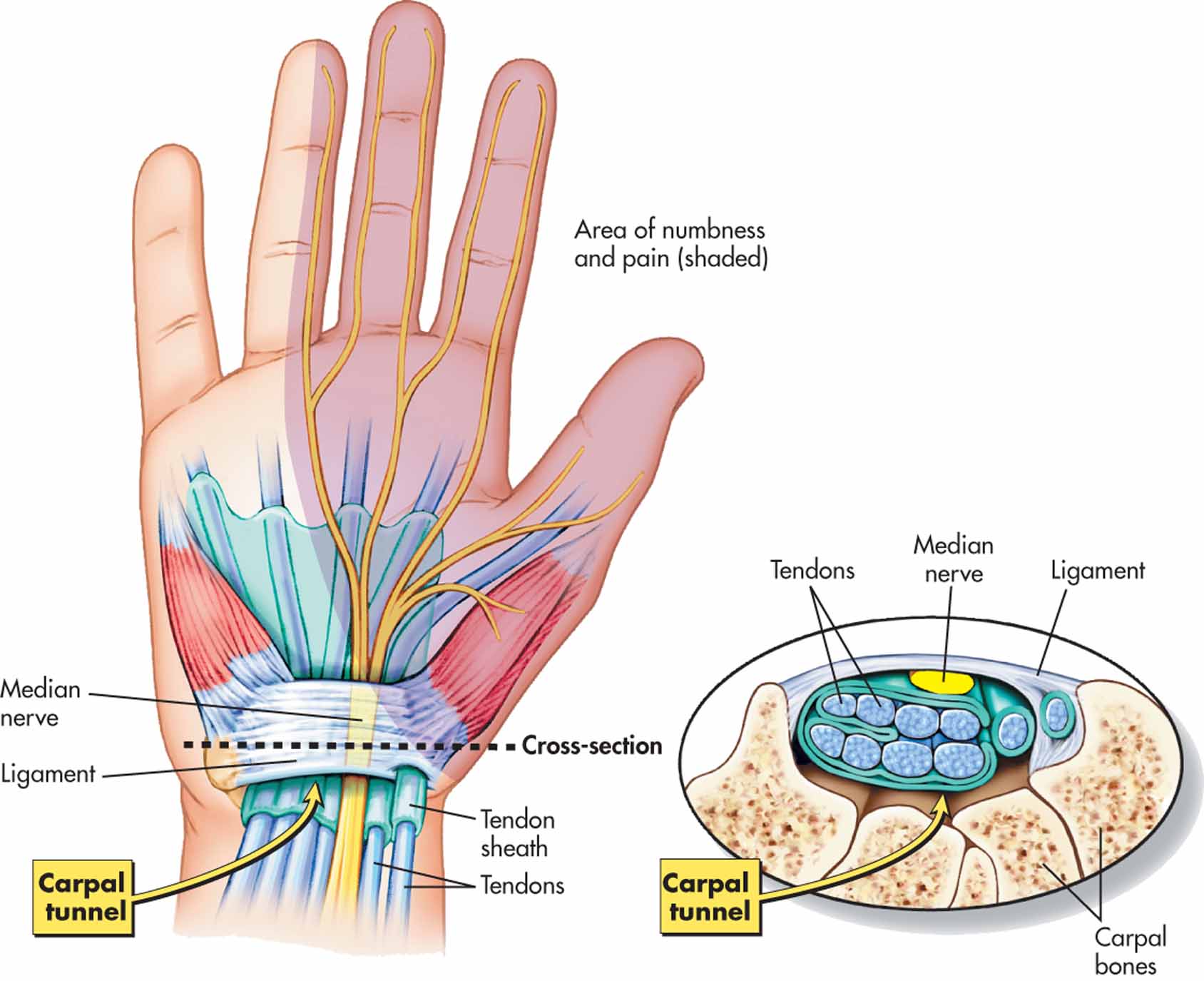 Carpal tunnel syndrome (CTS) can be treated by both conservative (Klauser et al., 2009) and surgical interventions. Surgical decompression of the median nerve through the incision of the transverse carpal ligament (either open or mini-open or under ultrasound guidance) is the most cost-effective therapeutic option (Hui et al., 2005). However, mild to moderate CTS can be treated by conservative interventions, like functional braces and local infiltrations (Prime et al., 2010) in the carpal tunnel, mainly with corticosteroids. Local infiltration of corticosteroids easily leads to atrophy of the median nerve, subcutaneous fat, and systematic complications, such as hair loss and Cushing syndrome (Lambru et al., 2012). This treatment option is clearly inferior to surgical intervention despite the fact that it can improve clinical condition. There is evidence that local infiltration of corticosteroids is not superior to local injection of anesthetic (Karadas et al., 2012). To the best of our knowledgement, use of corticosteroids in the clinical practice has not been studied. However, a surgical treatment decision is always taken by the patient who sometimes wants to delay or avoid the surgery because of psychological or medical concerns including allergy to local anesthetic and immune deficiency and prefers a conservative treatment in the initial stage. A conservative treatment has been considered insufficient for CTS. In vitro and in vivo clinical and laboratory studies (Allampallam et al., 2000; Farrag et al., 2007; Cho et al., 2010; Anjayani et al., 2014; Park and Kwon, 2014) have demonstrated that platelet-rich plasma (PRP) has therapeutic action in several neuropathies. It would be interesting if a PPP injection is used as an alternative conservative treatment of CTS. The purpose of this study was to investigate if, and to what extent, a PPP injection, under ultrasound guidance, can improve the clinical condition of patients with CTS.

Fourteen patients were selected from initial 32 patients who received treatment in the Department of Orthopedics of “Konstantopouleio” General Hospital, Greece because of mild to moderate CTS, with a minimum of 3-month duration of symptoms, regardless of age and gender. Patients were rejected if they had one of the following items: thrombopenia, platelet dysfunction, local infection, NSAID use (less than 48 hours prior to injury), recent illness, malignancy, hemoglobin (Hb) level < 100 g/L, pregnancy, rheumatologic disease, uncontrolled hormonal disorder, vibrating caused neuropathy, systematic inflammatory disease, polyneuropathy, inability to complete questionnaires (due to language unawareness or mental disability), addicted to alcohol or drugs, total loss of sensation in the fingers, prior corticosteroid injection in the same wrist, had undergone a surgical intervention for CTS in the same hand, neurological deficit, cervical radiculopathy and/or cervical spinal stenosis and/or intervertebral disc herniation, nerve entrapment syndrome in the same hand.

PRP injection proved to be well tolerated, with no side effects, infections or complaints for persistent pain. We achieved well defined ultrasonographic mobilization, hydrodissection and hydrodisolution (Figure 2B) of the compressed median nerve through PRP simple injection.

At the end of the first month after PRP injection, the mean reduction in VAS (%) was 48.6 mm out of 100 mm in comparison to rates prior to injection. At that time, we found eight patients with full or almost full recovery (VAS: 0 – 20 mm) and three patients with great improvement (VAS decline: more than 30 mm). The mean decline of the Q-DASH score was calculated just a little less than 70% compared to the pre-injection rates (from mean Q-DASH 56.42 prior to injection to mean Q-DASH17.5 one month after). These rates slightly more improved 3 months later (Table 1).